In 2009, I was watching a buddy of mine run the work climb at the Michigan Tree Climbing Competition. As he jumped off the last limb towards the bullseye, there was an audible pop, and I watched the tree lash backwards and my friend crash to the ground. The ring on his harness had popped. It turns out that he had bought the saddle from a reputable retailer that had installed the ring that came in a box from an Italian distributer that also happened to make shower rings. Somehow a shower ring made it into a shipment of life support rings and no one noticed. Thankfully my friend was close to the ground when the ring broke, but he still sustained life altering injuries. When that ring broke, there was a break in trust that I will never be able to wipe from my mind.

In the spring of 2014, I had the opportunity to attend a SPRAT training with Glenn Speight in Rhode Island. It was a week long course that covered the ins and outs of basic rope access work. I did not have much knowledge of this line of work but I was eager to learn. The course was set up in a tall warehouse which we had to navigate using a double rope system. This was interesting to me as they referred to Single Rope Systems and Double Rope Systems like we do in arboriculture but it meant something very different. They laughed when I said that I understood DRT as the traditional method in which tree climbers pass their line over a limb or through a pulley and hoist themselves up the rope using 2:1 advantage. In Rope Access, what arborists commonly call “double line” is still considered SRT climbing as there is only one rope in the system.

The two ropes involved in the SPRAT course has two purposes. One rope is the working line with an ascent device (Petzl Croll or Ascender) or a descent device (such as the ISC D4 or Petzl Rig). The other line has a backup device, (Kong Backup, ISC RED) that just trails up and down the rope in case something should happen to the working line. the backup device works much like a seatbelt jamming if hit with a dynamic load. In case something should physically occur to one of the systems, or a human error is made, there is always a backup system incorporated. 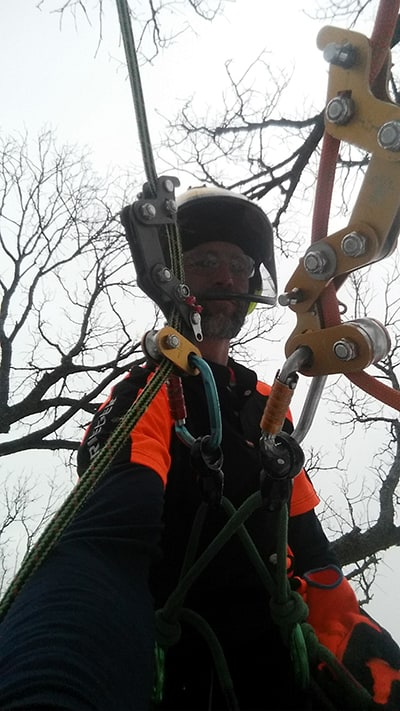 After spending the week learning SPRAT specific techniques, we took a test. The test required going through a series of maneuvers, such as making a long traverse, switching ropes, rescuing a victim and more. If at any point at all during the test we were only tied in to one rope we would fail the test and have to reschedule another test. The consequences of being tied in only once were severe and quite expensive to say the least and it was pounded into our heads to always be tied in twice! This is quite a shift from the tree climbing competitions where being tied in once is the norm and if you disconnect completely it is a disqualification. The safety margin of these two judged events are dramatically different.

I loved the class and with much concentration I ended up passing the Level 1 SPRAT training. When I returned home and started into the tree, I suddenly felt very exposed and uncomfortable doing something that had been so natural for me all the years climbing on a single line. I asked myself, what are the reasons that we as Arborists only climb on a single line and I went back to the truck and got another rope and Rope Wrench and went to work on that tree staying tied in twice.

One of the things that struck me in the SPRAT class was being told that in the industrial Rope Access world, there have been very few fatalities. Statistically almost none. This is in stark contrast to the tree industry where we talk about fatalities on an almost weekly basis. That is unacceptable. Looking at the statistics, many of these fatalities are caused by falling out of the tree for one reason or another. This is often the result of either cutting one’s rope, or not being tied in at all, or it can be from tree and anchor point failure. Looking back on my career I have made many mistakes. I have found myself high in a tree completely unsecured due to negligence or laziness and I have also cut my rope both with a chainsaw and handsaw. Luckily I am still here to talk about it. 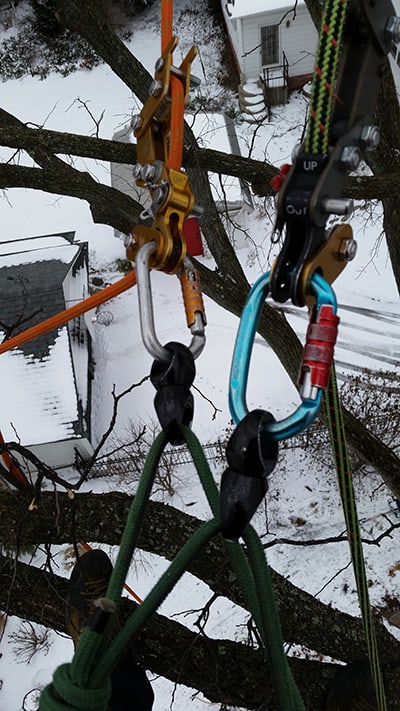 Just last week, a climber in Ann Arbor, trained by some of the best, neglected his saddle for too long and was also not aware of a recall of that particular bridge. These are the types of accidents that are non existent in the rope access world where there is redundancy incorporated into every life and death decision.
So, over the past two years, I have experimented with real double rope climbing for tree work and have learned many things about the process. One of the things to point out is that it is already a safety requirement for tree workers to be tied in twice while using a chainsaw and highly recommended while using a handsaw. The Ansi standard reads: "6.3.7 Arborists shall be tied in and use a second means of being secured (i.e., work positioning lanyard or second climbing line) when operating a chain saw in a tree."
I will be the first to admit that for much of my climbing career, I have taken this as a good suggestion but i have been known to cheat especially when out on a limb where lanyarding in is pointless and also for the sake of speeding up production. I have made many cuts with just one point of attachment.
When I started regularly climbing with two lines, I assumed that the going would be almost impossible and slow and tedious. But I committed myself to try it for a while. I committed to the experiment of using two ropes, two tie in points, and two anchor points at all times while aloft.
At the beginning, the going was very slow, I realized that several things would have to change in my setup to make it work. With one bridge on my harness, my ropes would quickly become tangled and impossible to coordinate.
Then I began using two separate bridges and two swivels. When I installed two Rock Exotica swivels on my harness, I read the instructions and right at the top were explicit instructions “NEVER trust your life to a single tool, must always use a backup” i looked at their carabiners and they say the same thing. Very good, sensible advice, if you think about it.
The swivels and two bridges opened up a lot of movements that were off limits before, such as 180 degree turns. Using only one bridge, I was limited to one line being on the left and the other on the right. The swivels and two bridges allow each system to be passed over the body and orient themselves correctly. 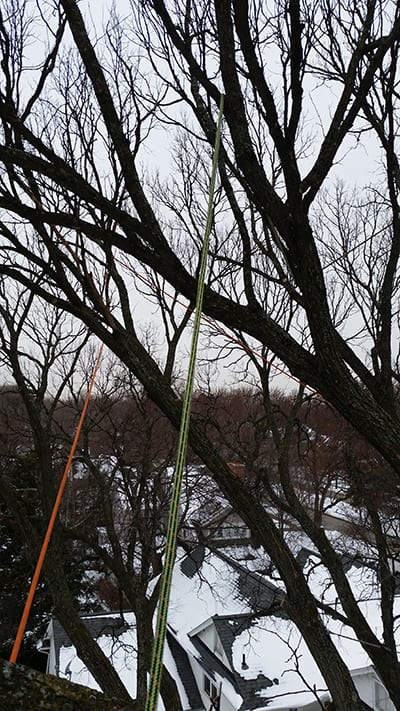 The safety advantages of this system were obvious from the beginning. Whereas before, I would say little mantras to remind myself to clip in twice when making cuts, I was a cheater and would often make cuts without a secondary tie just for the sake of expediency. Another advantage I found was that I started to backup questionable tie in points. I can remember clearly setting a TIP point and thinking that the TIP had probably 90% chance of not failing. Instead of removing my rope and installing it lower I would think; “90% is still an “A” and it will give me such solid work angles to work the tree!” The truth is that 90% is really an “F” if you have a 10% chance of dying. By using a second line, I can take now take advantage of the 90% crotch with one line but also have a 100% tie in point for my other line. In the unlikely event that my tie-in-point fails, I am still securely tied in elsewhere. I am also able to distribute my weight amongst more and more of the tree allowing me further access to the tips of the branches.
Being able to triangulate my system also helps work positioning as well. Balancing becomes easier if you are able to lean against two different points instead of one. Another perk is that when you need to pass through a redirect or around an obstacle, you never have to unweight your last redirect, you can keep tension in one rope and give slack to the other to pass it through the redirect. By alternating ropes and redirects you can pass your lines further and further out on the canopy, never having to introduce total slack into your system.
After two years of approaching all trees, big or small with two systems is that there are definite advantages. I can not say that it has increased my production. There are downsides as well, more gear, more time setting up the gear, tangles etc.. When I was a DdRT climber, I used to manage two feet of rope for every foot of rope I actually traveled. When I changed gears and straightened out my line, I managed one foot of line for every foot of rope I traveled, this bumped up my production greatly. Now I have gone back to managing 2 feet of rope for every foot traveled but I have also added another tail, another level of safety, another option for route planning.
This work is a practice, it is not a race. Adding another rope and system into my daily work practice takes a bit longer but it has increased my options as well as my margin of safety. Like the practice of always wearing a helmet, always putting on eye pro, always double checking your tie in points; being tied in twice is one of those things that will help us to come home at the end of every day.

Please leave your thoughts and comments below!

Previous
Your Critical Duty as a Tree Climber
Next
There’s no need to scream & shout!